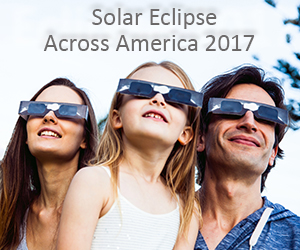 I have been receiving a lot of calls, texts, pm’s etc. about the eclipse coming up this week, and at first I planned to not get involved. This is a hot topic and after multiple calls, emails, etc., I decided to answer a few of the most asked questions. What’s the best way to view the eclipse?  Will the glasses from my dilation work?  Can I use my welder’s helmet?  I’ve decided to try to answer most of the questions I’ve been asked and help others make the best informed decision for themselves.  First and foremost I think it’s important to remember to be smart about the decisions made Monday because our decisions and actions can affect the rest of our lives.  So…… A good rule of thumb is — Don’t be dumb.  Here is a list of the most frequently asked questions I have received and my somewhat educated and perhaps a bit snarky answers.

Bryan and I met in the spring semester of 2000.  It was our last semester of undergrad at NSU in Tahlequah.  We had actually been in several classes together before but had somehow never connected.  He claims he saw me 3 years prior to meeting and knew we’d be together.  He’s a romantic at heart. That’s one of the many reasons I love him.   That last semester every morning I would be walking out of the science building as he would be walking in.  I had a newborn baby and an 8:00 physiology class.  If I could find my old notes from that class, I would totally share them.  I’m not sure that I learned much in my sleep deprived state.  I think I was mostly in a stupor and my chicken scratch falling off the page would testify to that.  (Sorry Dr. Clifford) When we look back now at the friends, acquaintances and classes that we shared during the years we were in college together, it amazes me that we never connected sooner.   I honestly believe the Lord guarded us both from each other for lack of better words.  He knew that I wasn’t in the right place those first two and half years of college and so we didn’t find one another until the last semester of my last year of school.

We would pass each other every morning, make eye contact and perhaps a quick smile.  If he was real brave he might say “hi” as he hurried on in.  By the end of February, I began to wonder if we would ever get further than the quick hellos.  Then one morning my best friend Kate (who assured me that Bryan liked me) and I decided to go eat breakfast.  Then it suddenly turned into an invite for Bryan and his friend as well.  I actually don’t remember much from that breakfast because I was so nervous. I do remember however that Bryan picked up the whole tab trying to show off.  I’m pretty sure he had to work extra the rest of that week to make up for that gesture.  It was still a week or so of me “accidentally” running into him before he asked me on our first official date.

We decided to have the official “first date” at my apartment because I didn’t have a baby sitter.  I bought the fixings for spaghetti because it was cheap and easy.  And when Bryan arrived at my apartment, I was an ugly, hot mess.  The baby was sick.   I looked like warmed over death from lack of sleep and taking care of a sick baby.  My hair was in a ponytail, no makeup, shorts and a t-shirt that had baby puke all over it.   So, Bryan stepped in, and never missed a beat.  He stepped up to the plate, fixed dinner and saved the date.  He later admits that was the only meal he really knew how to cook!

It wasn’t the most romantic meet up or first date but I wouldn’t change it for anything.  I was given a true glimpse at his character in that short period of time and I knew right then that he was definitely worth getting to know.

I have absolutely no idea what I’m doing!  I’ve been feeling led to start a blog for quite some time now, but have been too scared to do it.  I mean really who wants to hear what I have to say any way?  Are my words worth the time to read?  I must be crazy!!  These are all thoughts that have continually surfaced throughout the past year or so any time the mention of a blog has come up.  Yet, here I am.  On a whim I looked up blog sites and before I realized what I was doing I had signed up with WordPress.  Then the panic attack started….

After a day of beating myself up and fretting over my impulse move here I am writing my first official blog.  My name is Courtney Bratton.  My husband of 15 years and I live in small town Oklahoma with our 3 kiddos.  M (17), T (11), and L (9).  Yes, I know the timeline doesn’t add up.  We will get to that at a later date.  Our family lives on over 100 acres of woods and pasture land.  We have almost every kind of farm animal known to man–cows, chickens, turkeys,  bees (that’s right– bees!), cats, dogs, a bunny, a turtle and a pony.  It takes quite some time to get everyone fed and watered every day and apparently my hubby has decided on this hot July day we need to work cows in the 98 degree weather!  Can’t wait!!

When I was younger my path was laid out straight in front of me but I’ve made lots of twists and turns and have even fallen off the path along the way.  My hope is to share with others what I’ve learned sometimes the easy way and sometimes the downright hard way.  I want to share my love for God, health, life and beauty to others and I hope that someone will gain something from my crazy, messy life!